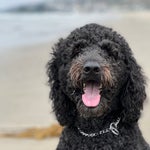 "Happiness is a warm puppy."

GET TO KNOW ATTICUS

🐾  Lacking opposable thumbs, Atticus doesn't really provide much practical assistance in the office.  But, there's a lot to be said for the de-stressing presence of a good dog at your feet while at work.  Atticus is the 68-pound, Standard Poodle grandson of a "Best In Show," but, alas, is not equipped to pass on the family gene pool (about which I still feel twinges of guilt, frankly).  Boasting an impressive vocabulary (several hundred words and phrases, some in multiple languages), his favorites are "Beach," "Scooby Snack," "Ride," and "Nash" (Nash, a 90 lb. Rhodesian Ridgeback, is Atticus' best friend and wrestling buddy). He warms quickly to (nearly) everyone he meets, tends to rub against favored humans like a cat, howls along with the sound of the coffee grinder, and loves going to the vet. Still, he is fiercely loyal to Mom and Dad, and will not suffer even the hint of someone acting badly. I could carry on my practice without him, of course, but Atticus is unquestionably value-added to Wojcik Law Firm.

We wanted a name that was strong and unique, one with interesting history.  His legal name on his papers -- Atticus "One Shot" Finch -- is an obvious nod to the back story of Harper Lee's character in "To Kill a Mockingbird" (the film adaptation of which was required viewing for one of my ethics classes at Notre Dame Law School).  There are also a few figures from ancient Rome and Greece with the name, whose histories we thought were pretty cool.

Havarti. Penne with olive oil.  A tiny taste of bourbon now and then. A finger tip of foam from the head of a well poured Guinness beer.

Atticus and I would love the chance to get to know you and your business, for you to consider me a professional resource to help protect your interests and grow your business. Make an appointment now for a free consultation. 🐾

Click on the phone number above to call, or on the button below to conveniently schedule an appointment directly in my calendar. Note that a communication alone may not create an attorney-client relationship, so please do not share confidential information in the scheduling form.

Schedule time with me

•  Able to provide many services in all other states